Do People Still Believe In God?

For Believers, It’s A Silly Question.

For non- believers, the believers are the silly ones.  This debate has been raging for thousands of years, and will continue to rage while there are still two guys left on the planet with different opinions on the subject.

I’m a person.  I believe in God.  That answers the question in the title.  There’s at least one person who still believes in God – me!

Ok, if that’s all I wanted to say this would be a really short post.  I have more to say.

Non-believers Are Called Athiests or Agnostics

There has been a rise in religiously unaffiliated Americans over the last few years, with a corresponding rise in athiests.  Check out the following chart, from the Pew Research Center. 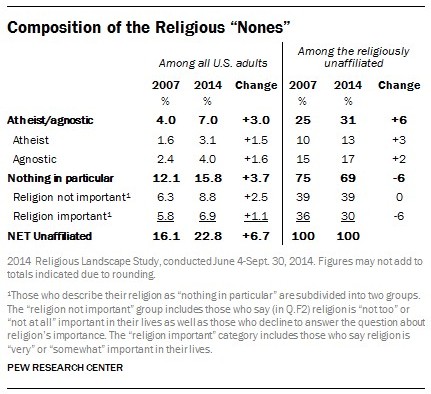 Here are 10 facts about athiests.  Source:  The Pew Research Center

That’s just some interesting information.  I have no beef with athiests.  People can believe what they want.

Why Do Some People Choose Not To Believe In God?

Basically, from what I have researched, those who have decided not to believe in God believe that there is either not enough evidence to support belief, or that there is more compelling evidence pointing to the conclusion that God does not exist.

“No God” arguments are either deductive or inductive.  Deductive arguments basically say that there are conceptual problems with any being worthy to be called “God.”  No being can be that good or powerful.

Inductive arguments try to present emperical evidence that argue that God’s existence is improbable or unreasonable.  It’s like saying that God’s non-existence is analagous to the non-existence of Santa Clause.  One arguement says that if God is an all-good, all-loving being, then He wouldn’t allow so much suffering to go on in the world.  Since there is so much suffering, then he must not exist.

I also believe that modern, educated people don’t want to be grouped with those more primitive and less enlightened people who blame everything good or everything bad on the whim of God, or the Gods.  It’s true that in the past, civilizations large and small have decided to worship pretty much everything and anything.  Even sophisitcated civilizations like the ancient Egyptians worshipped multiple gods.

Many look to science to show that all causes and effects are physical and believe that science can explain all things.

Are Science And Religion Compatible?

Better said, can physical proofs be applied to spiritual things?  I don’t think so.  How can science measure faith?  Can science explain spiritual reverence or feelings that comes to those who prayerfully commune with God?  I believe that truth is truth, and all truth is independent of circumstances, or it wouldn’t be truth.  Some things though, can’t be measured by physical means.

Those who don’t believe in God say that religion is nothing more than superstition, a crutch for those who can’t explain what happens in their lives.

All That Being Said, I Still Believe In God.

Belief in a Supreme Being is a matter of FAITH, not Science.  Of Belief, not proof.  God does not reveal himself to everybody because He has given us all our agency, our ability to choose.  Those who seek Him can find Him, those who don’t, won’t.  We all have our right to choose.

I believe that God is the father of our spirits.  He put us here on earth to learn and to grow, to seek truth and knowledge for ourselves.  If he “popped in” occasionally to check on us, wouldn’t we would be more prone to do His will so He wouldn’t be upset with us the next time He showed up?  After all, who wants to make God mad at them?  Life wouldn’t be a fair test.

So, God is there, but He lets us live our lives.  Our problem is that we assign our perspectives to His.  “Why did God let my son die”  Why doesn’t He stop bad people from hurting others?  A loving god wouldn’t have let Hitler come to power.  But He respects the free agency he gave us too much to interfere in our choices.  Even our bad choices.

The problem with the kind of thinking that wants God to chase off the bad guys is that it’s finite.  God’s perspective is infinite.  People whose lives get cut short on earth go on living in the next place.  The spirit does not die, just the body.  Our spirits are who we are, our bodies just carry our spirits around.  Death is just a door to our next phase of existence.

That’s part of what I believe, and I take all that on faith.  I can’t prove any of it.  But, that’s why I believe in God.  I believe He is real, he is aware of each of us, and He lets us decide for ourselves whether we want to believe in him or not.

So, it comes down to a matter of choice.  Believe or don’t believe.  No one can prove either side.

Thanks for reading.  I usually don’t delve into such topics, but this time I got the whim.

Please leave a comment below.  I promise to respect your opinion.