What Is A Tipping Point? What Happens When It Is Reached?

Webster’s Dictionary defines a tipping point as “the critical point in a situation, process, or system beyond which a significant and often unstoppable effect or change takes place.” Tipping points cause changes to occur. That change in some instances can be irreversible, but in most cases its not. 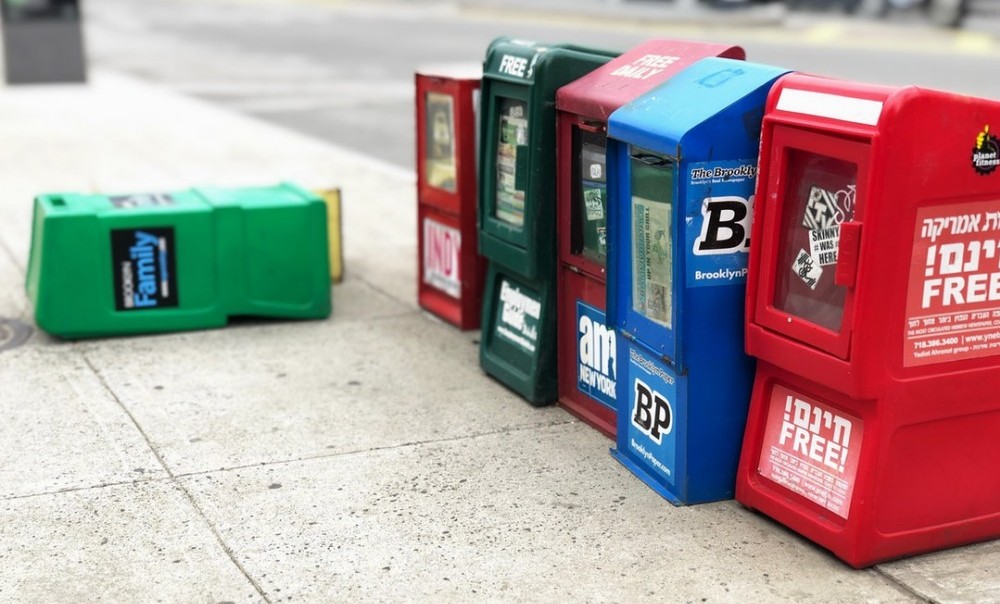 The tipping point of an object changes the orientation of that object. There are a couple of things about tipping points and objects that are common to each one, whether the object being tipped is big or small.

First, objects at rest are stable, and when we want to tip them over, the initial movement is the most difficult. We have to overcome inertia.

Second, as the object approaches the point where it will tip over, it becomes easier to tip, and at the tipping point just about any object can be controlled with very little effort. When it starts to tip over, then the forces are the opposite. The farther the object falls, the harder it is to stop.

In the above photo, all the newspaper vending machines are in a stable position. The green one has tipped over and changed its orientation.

Take as another example a large truck or tractor tire. CrossFit athletes and people training to be firefighters get to play with these tires on a regular basis. They don’t get to stand them up and roll them along. Instead, they pick up one end, flip the tire over, and then pick up an end and flip it again, until they reach the finish line. 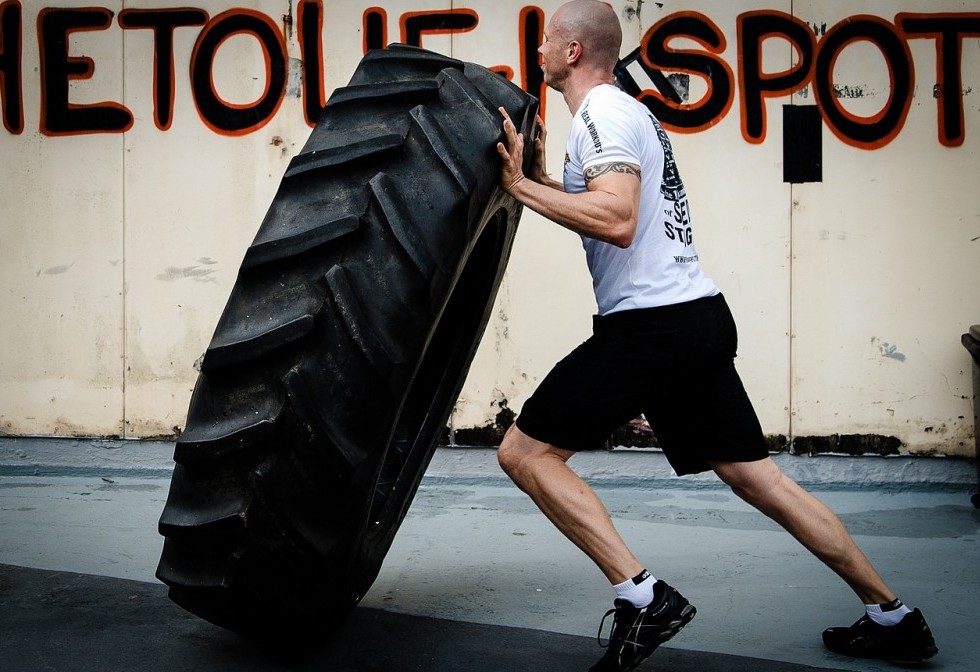 The hardest part is the initial lift on that tire. As it approaches vertical, it is easier to move, and at the vertical, when it is ready to tip over, there is a point where the tire is balanced and can go either way.

This is the tipping point.

Do People Have Tipping Points?

Yes, we do. There are times in all of our lives when we reach a point where we feel that something has to change.

I’ve reached a tipping point in my life.

I have been getting discouraged lately, because my life has some issues that I have been dealing with for quite a while, and that I want gone, or changed. What to do? Which way am I going to fall?

One of the big issues is my online business. (I’m not going to bother you with my personal issues, because they’re personal). I’ve been working on my business, which is affiliate marketing, for about a year, and I have made great progress. I haven’t seen the kind of success that I want, though, at least not just yet. I feel like I’m banging my head against the wall sometimes. Does that sound familiar to you?

I’ve got to tell you, that twinge of jealousy bothers me, because I thought I was better than that. I”m working on it.

So, I feel like that tire in the photo above. I’m pretty close to vertical, and I’m going to fall to one side or the other. If I fall one way, I’m going to just give up and stop trying Be done with it. Move on. I tried and failed. Life continues.

Yes, you’re right. I’m going to fall over. And I’m falling to the side that gets me working harder, with more persistence, until I reach success with my online business. Success with my blog. And by success, I mean a 6-figure income yearly. I’ve heard it said that the only way to fail is to quit, and I’m not going to quit.

Fortunately, I’m associated with a great online training platform that it totally dedicated to helping people succeed online. There are lots of websites that can help you succeed online, but they are not all created equal.

I’ve found the best, most cost effective business training and help available online. It’s called Wealthy Affiliate, and I challenge anyone to find something better for the same investment.

When I signed up, Wealthy Affiliate was FREE. In fact, when anyone signs up, its FREE. It stays free until the member decides to upgrade to premium training, which pretty much everyone does, because that’s where the rubber meets the road for people who really want to make a great living online. It took me about a week to decide to upgrade.

As I said, you can get started for free, in fact you get 10 free lessons and 2 free websites with the Starter training. If you can take it from there without upgrading, then you’re a better business person than I am, and I salute you. If you want to see what the free training is all about, click here.

So how much does it cost to upgrade to premium with Wealthy Affiliate? The honest answer is about 98 cents per day. Let me qualify that. If you decide to pay monthly, its $49 per month. That’s $588 per year, which comes to $1.61 per day. So how do you get 98 cents per day?

If you pay for a full year at a time, instead of paying $588 you pay $359. That comes out to $.98 per day. When I went premium, I was monthly for the first month, then decided If I was serious and really wanted to succeed, then I was going to commit and save some cash at the same time. I paid yearly.

In fact, I just paid for my second year last month.

There are a lot of reviews of Wealthy Affiliate on the internet, and the vast majority are positive. That’s because they’re written by actual members of the platform and are involved with the growth and success it brings. My review is here.

If you are looking for a way to make some extra money online, maybe even a full income, I’d like to recommend Wealthy Affiliate to you. It costs you nothing until you want it to, so It’s at least worth a look. It’s not a get-rich-quick scheme, its a legitimate business training platform that will guide you to success with your own online business.

The training is there, the work is up to you. I hope to see you in Wealthy Affiliate with me.

Thanks for reading. I have to advise you that the FTC requires me to notify my readers that if you click on an affiliate link and end up purchasing a product, I will earn a commission. That’s how affiliate marketing works.

Great point of view of life in general and more specifically, affiliate marketing.
Also, your attitude is very positive and uplifting. If I’ve learned one thing it’s to never quit. Some of the best moments in my life came after crushing “failures” and all because I didn’t give up.
Learn from so-called failure and make necessary changes, then try again. You will succeed, my friend.
Good luck.

HI, Ed.  I think we all go through ups and downs in life, and I really like your comment about how the best moments can come after crushing failures if you don’t give up.  You’ve inspired me!

I think people reach their tipping point on their own but more often when prodded by some event or epiphany that pulls them into that point where they have to make a decision.

A tipping point can be an opportunity for positive change in your life if you recognize them. As you mention, the same is true when it comes to affiliate marketing.

Too many people are afraid to take action or they may not believe in themselves or they may suffer from negativism that surrounds them.

I like your reasoning and agree that Wealthy Affiliate is indeed a valuable platform where you can learn how to properly get an affiliate marketing business in place.

The many tools and features are also useful for other kinds of online marketing, i.e. e-Commerce or training etc. I have been a member of that platform for 3 years now and it has been wonderful.

Thanks for your comment, Dave.  Your words are wise and true.  Good luck in you business and in your life!

Does Your Website Traffic Look Like This? Or Like This? In the beginning, as you build your new website and get started with a new online business, traffic will look like the second picture. That’s to be expected. New sites have to compete with established sites, and new sites are …

What Are The Best Online Business Opportunities From Home?

Are You Looking For Top Online Business Opportunities That You Can Do From Home? Right now, in the early part of 2020, the world is in crisis from the COVID-19 corona virus. Much of the world has been told to stay home to slow the curve of the spread of …

The Evolution Of Marketing

Marketing Has Come A Long Way, Baby! When we think about the evolution of marketing, don’t you agree that our perspective depends on our life experience? Younger marketers may start their experience in the current social media and mobile device era, while those of us who are older may remember …