What Is The Cloud And How Does It Work?

I’ve Looked At Clouds From Both Sides Now…

If you’re from my generation, and I’m in my 60s now, you probably remember Joni Mitchell’s song from 1969 called Both Sides Now. Part of the lyrics go:

“… I’ve looked at clouds from both sides now

From up and down and still somehow

I really don’t know clouds at all…”

If you’re an old guy like me, or an old gal like my wife, then maybe you don’t have as much computer knowledge as the young guns do. I was already an adult when computers started to become available, so I didn’t have the advantage of growing up with them around like the next generation (my kids) did. Now my grandkids are growing up and they are completely comfortable around computers and technology.

Don’t get me wrong, I pretty much know my way around a computer, both Windows and Mac. I can navigate the internet too. Still, while my generation was growing up, there weren’t any personal computers. Heck, even calculators were new to us. Computers were those big wall-to-wall things in the basements of universities or the government.

My first experience with computers and computing was using the old punch cards to write a simple program. I think they called it Fortran. That was when I was in college, and one of my programs got stuck in a loop and kept running, and running, and running…

The above image is what those old cards looked like.

Because computers came later in our lives, sometimes people from my generation are a little weak on the terminology the computing world uses.

One of the newer terms, at least for me, floating (no pun intended) around the internet is the CLOUD.

Just What Is The Cloud, And How Does It Work?

One of my first experiences with the cloud involved iBooks on my apple phone and my tablet. I liked to buy books, and if I didn’t read them for a while somehow they got sent to the cloud. The icon for the book was still on my phone, but there was a little cloud beside it that told me it had been sent to storage.

That’s basically what the cloud is – off site storage.

It’s one of the wonders of the internet!

Here’s a short You Tube video explaining the cloud.  It’s done by Mashable.

For quite a while I couldn’t wrap my head around the term “cloud” meaning a place where digital stuff was stored. That’s because while I was growing up a cloud was used to indicate someone was depressed or in a bad mood, or maybe just unlucky. Have you ever seen drawings or cartoons of a guy walking around with a cloud over his head? Maybe it was even raining. Having a cloud wasn’t a good thing.

And I used to be a helicopter pilot. I noticed pretty early on that you can’t see when you’re flying in a cloud. Again, not really a good thing.

Now it is a good thing, as far as data storage is concerned.

Here’s an easy way to understand. Think of the cloud as a safe deposit box for your data. It’s in a secure place and it’s protected. You can access it when you need it with the key, which is your password.

How Safe Is The Cloud?

Your data isn’t floating around on the internet in some kind of mist waiting to be accessed. It’s being stored on a secure server somewhere. It’s in a pretty safe place. While no place is perfectly secure, your data stored in the cloud is safer than it is being stored on your own device.

That said, any data stored off site, or in the cloud, is only as safe as your password security. 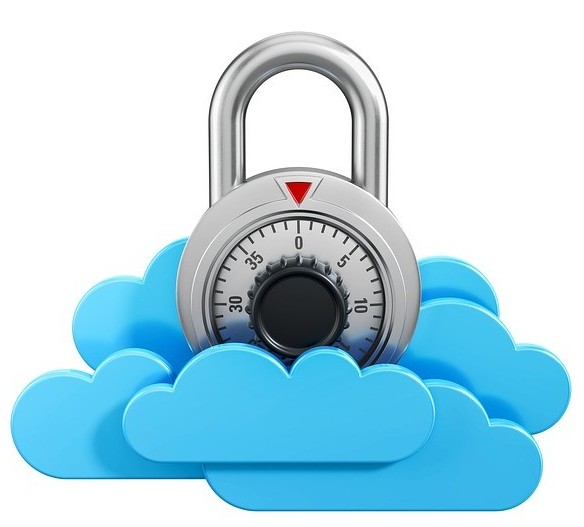 There are many ways to keep your passwords secure. One way is to not use the same password over different platforms. You should also combine letters, numbers, and even symbols in your passwords. Using the name of your dog or your kid’s birthday isn’t going to be very secure. Password security is in your hands.

What I’m saying here is that it’s a good idea to avoid using passwords that are related to your life. I know that makes them harder to remember, because the number of passwords being used can build up quickly.

I’ve frustrated myself many times by going back to a program that I haven’t used in a while and not being able to remember the password. Then I have to go through the effort of clicking on the “Forgot Password?” button and getting a new one.

I write my passwords down and keeping them in the Notes function on my iPhone. Probably not the best place, but I recommend that you keep them somewhere where you can access them fairly quickly when you need them. Not somewhere that they can be discovered by a bad guy, though.

The posts that I write, such as this one, and publish on the internet are stored at Wealthy Affiliate on their servers. I don’t have to keep them on my hard drive Wealthy Affiliate is the platform I use for training and support for my websites.

Have You Thought About Writing A Blog?

That was almost two years ago, and I’m still with them. I recommend them highly for anyone who wants to start blogging and perhaps even make money doing it. Quite a lot of money for some bloggers. You can check it out easily, and there’s no obligation to do so.

You won’t be asked for a credit card to start, you’re just asked to fill out a profile and you’re off and running. You get 10 free lessons and 2 free websites to start, which should give you plenty of time to decide if it’s something you want to pursue.

There’s a lot of potential and you won’t find better training and support anywhere, in my opinion. Just tap the banner to get magically transported to the Wealthy Affiliate main page.

Thanks for reading. I’d appreciate any questions or comments you want to make. I’ll be sure to answer you.